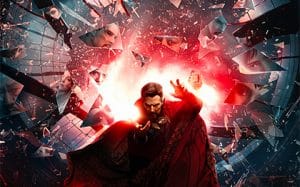 Doctor Strange in the Multiverse of Madness

Stephen Strange has terrible nightmares, in which an alter ego of his escapes with a girl in a surreal scenario. He tries to reach an arcane white paper, but a demon instead wants to take control of the girl and steal her-her transdimensional powers by killing her in the process. When he awakens, Strange travels to the wedding of his beloved Christine with another man. The magician tries with little success to hide his pain and, almost luckily, a huge monster who chases the same girl in his dream gets to get rid of him. Strange and Wong thus make the acquaintance of the young woman: America Chavez, whom they will have to protect from a hidden threat in the multiverse. In search of help, the wizard goes to Wanda Maximoff, the very powerful Scarlet Witch.

Second chapter of the adventures of the wizard of the Marvel universe, Doctor Strange in the multiverse of madness is a roller coaster of fantasy and terrifying scenes in the best style of Sam Raimi.

Perhaps never like this time in a Marvel film, the director’s brand is recognizable. There are undead, furious spirits, brutal killings (much more than usual, in fact, we advise against the film for very little ones), witches and other frightening dimensions, fist fights and super powers, all accompanied by the soundtrack of a wild Danny Elfman. Together, he and Raimi, sign one of the most exciting sequences of the film: a musical battle where the notes come alive, becoming weapons, and consequently the instruments are like arsenals. A touch of lightness for one of the in some ways most dramatic clashes in the film, which loves to darken the most idyllic situations and lighten the darkest ones, however speaking more the language of action and entertainment, rather than settling on the usual predominantly verbal irony of the others. Marvel movies.

Doctor Strange in the multiverse of madness is then a summa of Marvel mythology that will delight the most passionate viewers of comics: there are Mount Wundagore, the Illuminati, the Incursions and numerous surprise characters, including on the credits the one played by, none other than Charlize Theron! Doctor Strange, a final sign tells us, will return, hopefully again with Sam Raimi, as the director gives the idea of ​​having really enjoyed himself and his enthusiasm for him is contagious.

This applies both to the more special effects sequences, such as the first stroboscopic crossing of numerous universes by Strange and America Chavez, and to his typically reckless camera movements, such as when the spirits threaten Christine in a series of closely spaced carts. and with the whirl of the camera.