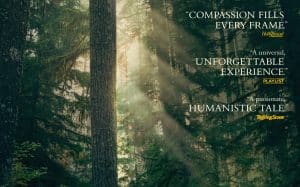 At the end of the forest live a father and a daughter. Will and Thomasin alone form a community with its rules and philosophy. Tom, as his father calls her, is a diaphanous adolescent who shares a sylvan Eden with her parent, Will, a traumatized war veteran, has voluntarily retired from the world by embarking her daughter into a hermit life. An expert in the art of survival, Will has passed on solid knowledge to Tom and now lives clandestinely with her on the edge of Portland, in the Oregon National Park. But one day they are discovered and forced to return to a more normative social and economic order. The social services offer him a roof, a school, a normal life to which Will can not quite resign himself and that Tom lives as a (beautiful) discovery. The awareness of this divergence will lead to independence.
Eight years later An icy winter, Debra Granik moves from Missouri to Oregon but remains faithful to the margins. Margins that offer new perspectives.
At the heart of the film there is once again a young girl and her intense relationship with her father. Yesterday was Jennifer Lawrence to incarnate a teenager in search of the parent who had left the home, today is the reverse. The duo is fusional. Father and daughter live in autarky in a forest, exploring the concept of self-sufficiency to the maximum. He has a problem integrating into a society he has not chosen, she has been preserved until the day she sees another possible way. Their balance falters but never their love in resonance with the lyric minimalism of the director that grants characters and landscapes.
Unlike its title, which suggests the deliberate intention of the protagonist to ‘leave no trace’, the author follows in his footsteps and finds the discreet path of the forgotten volunteers, of people entrenched in the woods, condemned to a wandering life to resist an alienating modernity or to cure a post-traumatic syndrome caused by America’s inexorable wars. This is a true story to serve Debra Granik’s film this time that does not cease to say the excluded, the invisible, the ‘errant dogs’ as in his documentary Stray Dog, a story by a Vietnam veteran biker.