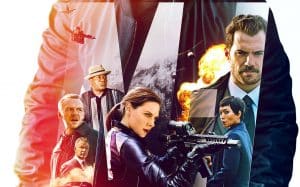 Ethan Hunt receives in Belfast the order of a new mission impossible: recover a suitcase of plutonium and find the bad ones who invariably want to get their hands on it. In the footsteps of John Lark, the mysterious financier of the kidnapping of an anarchist scientist and an expert in nuclear weapons, he finds his old comrades in Berlin: Benji and Luther, to whom he saves his skin compromising the mission. And now he has to repair, throwing himself on the sky of Paris to (s) mask Lark and meet the White Widow, a sexy and lethal mediator. As with every mission, nothing will go as planned.
Conspiracies, betrayals, scams, government secrets, geopolitical maneuvers, double (and triple) game will lead Hunt and his team of loyalists to the four corners of the world to save the planet.
Needless to ask if Mission: Impossible – Fallout is better or worse than Rogue Nation or any other episode of the saga. Answering is practically impossible because everyone has his reasons, his affinities with the previous narrations, with that director, with that story. The only repeatable replica is the solidity of a saga, one of the most important and appreciated in the landscape of superproductions, which re-launches again and again. If the previous episode was a firework, the next one will always be an amazing turn. Every time more beautiful, every time bigger, every time more crazy.
Mission: Impossible – Fallout confirms the assumption and wins the challenge by updating what had already been thought, choreographed, chased and seen a thousand times. It all starts with a dream that turns into a nightmare and gives the tone (dark) to the new mission. In a corner of paradise, Ethan and Julia renew their vows under the gaze of a priest who has the face of Solomon Lane, the bad schizophrenic of Rogue Nation.
With the antagonist of Sean Harris, also Rebecca Ferguson and Christopher McQuarrie who signs the hinge episode of the saga launched in 1996 and adapted from the cult series of the sixties. The new adventure of Ethan Hunt closes a long narrative arc, heals symbolic wounds and summons all previous chapters to find a pyrotechnic balance. The fascination of the double of De Palma, the choreographic and spectacular tension of John Woo (the scene of a climb with the snow instead of sand), the intimate folds of J.J. Abrams (the return of Michelle Monaghan, which this time is more than an appearance), Brad Bird’s burlesque mechanics (Tom Cruise as Buster Keaton runs at breakneck speed) become the fuel for an apocalyptic adventure that gives vertigo and often reaches an almost poetic form of abstraction.