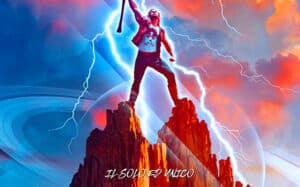 Fresh from numerous mourning and a period of depression, complete with fat, Thor, the son of Odin, has found his shape and sought serenity in space, together with the Guardians of the Galaxy. Thus he learns that Gorr the slaughterer of the gods is unleashing panic on several worlds, one of which is defended by his Asgardian companion Sif. Thor leaves the Guardians and, along with Korg and two giant goats from an alien race, rushes to Sif’s rescue, only to find that Gorr is headed for new Asgard, on Earth. Here the God of Thunder confronts him for the first time and finds Jane Foster who has in the meantime taken possession of Mjolnir, her first enchanted hammer, and has taken on the role of the Mighty Thor!
After the public and critical success of Thor: Ragnarok, Taika Waititi resumes and refines his own recipe, for an equally comical and super-pop film, but with more heart, thanks to two tragic figures like Gorr and Jane Foster.
The doctor who Thor has long been in love with hasn’t been seen in a while in the Marvel Universe movies and in Thor: Love and Thunder we finally find out the reason for her: she fell ill with cancer. We also learn why she can raise Mjolnir, but also that her transformation into Mighty Thor has a side effect … The storyline involving Jane is basically faithful to the comic story arc of the character conceived and scripted by Jason Aaron. Things go a little differently for Gorr who, disappointed by the gods of his planet, indifferent to his pain and only longing for new sacrifices, formulates a peculiar plan that leads him to need Thor.
Beyond the McGuffins he has to pursue and how he wants to carry out the extermination of the gods, Gorr is just as determined as he was in the comic. He is in fact a father who has lost his daughter, more or less like Wanda had lost her twins, continuing, after Doctor Strange in the multiverse of madness, a trend of the Marvel Universe for which castrated or canceled parenting is at the origin of extreme choices that lead to evil.
Thor’s path is instead that of a man who tries to prove himself worthy of responsibility, especially in the face of the vain attitude of the other gods. When the heroes, along with the noisy and hilariously bleating alien goats, go to Omnipotence City to ask Zeus for help, they encounter numerous gods who agree with Gorr and his atheist purposes. Playing the greatest divinity of Olympus is a happily overweight Russel Crowe, shameless in talking about orgies and anything but brave. The other deities are, at best, funny comic figures, in the style of Waititi, where the unforgettable Bao, the god of ravioli, stands out above all.