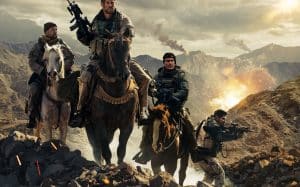 After the events of 11 September 2001, the Western world is shocked by what happened. The US military is thinking of an immediate counter-off, which breaks the rule of Al-Qaeda in Afghanistan: Mitch Nelson and his men volunteer for a dangerous mission alongside Abdul Rashid Dostum, lord of the Uzbek war, in an attempt to reconstitute the Northern Alliance in an anti-Taliban key.
The times in which every justification or celebration of an American conflict sounded like a propaganda and insincere act, which masked neocolonialism under the guise of the exportation of freedom, seem very far away.
Today, in the confusion of the Trump era, which messily mixes patriotism and populism, humus seems ideal for a production signed by Jerry Bruckheimer that looks at John Wayne’s Green Berets as an unreachable model of “educational” war movie. That artificial form, therefore, of simulation of the war, which puts the verisimilty in the background compared to the intent of comforting and celebrating the representation.
Nicolai Fuglsig, Danish director of TV commercial, takes up the text of Doug Stanton and immediately brings us back to the Twin Towers and the great trauma with which the third millennium began, trying to outline a psychological picture of the characters that will remain only sketchy. The 9/11 massacre, which so severely affects the Western world to nullify its self-defense, also transforms the unsuspecting among us into vindictive Charles Bronson, without a roof or law. Until bringing a captain who has never killed a man before now to wage war in the “graveyard of empires” and to hastily justify an instant military intervention, conducted before having certain proof of the responsibility of Osama bin Laden. Difficult, if not impossible, to believe that things have gone as in Stanton’s story: twelve knights (not in a figurative sense) who do the work while the world recovers from the shock, with Captain Nelson developing a friendship and relationship mutual respect with the warlord Dostum.