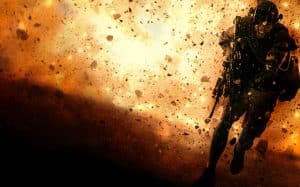 13 Hours- The Secret Soldiers of Benghazi

Libya, 2012. Jack Silva, in need of some extra money, he chooses to take up again the rifle for GRS, the Guards Security, supporting body to the CIA. Arrived in Benghazi, soon he finds himself in the middle of a civil war. On the last day of his mission coincides with an attack, extensively planned, Libyan terrorists to American secret base.
Expect attentive reviews on the subject of the meaning of a tangled situation or the psychology of the opposite war fronts is totally out of context. 13 Hours: The Secret Soldiers of Benghazi was a Michael Bay film as such, is not the place to ask whether it is right or wrong that America recite the role of world policeman required, or if the fact of being present in forces while away from home is a direct cause of the absurd loss of many human lives, and not American.
If Bay launches tirade policy 13 Hours, this is directed to the administration in charge during the events in Benghazi, and in particular to Hilary Clinton – then Secretary of State, during the film’s release in full instead of running the House white – through not too veiled references to the lack of interest in supporting the troops and to the prevalence of bureaucrats, who only think about retirement in places that should only accommodate professional fighters. The review of the facts of Benghazi is thus transformed, almost inevitably, in the glorification of the contractors, of those veterans returned to civilian life – unshaven, contact lenses, chat in skype with familiair – but unable to do without the war front . And aware that their presence is crucial, “over there”, in that infamous Middle East, despised for its climate and its dangers, but inevitable destination of US soldiers. With 13 Hours Bay creates a work that does not arise at all as a minor in his filmography, but rather as one of the strongest episodes in theory. Echoing the spirit of anarchist typical Eastwood right – warriors on the one hand, scaldascrivanie who can only give orders on the other – the Transformers director is thrown headlong epic of perpetual war focusing on addiction to it. Already seen in The Hurt Locker by Kathryn Bigelow, it will say, but the strength of the Bay is (also) the humility of one who has no illusions even for a moment to be the first to say something; combined with the persistence of one who knows that sometimes concepts should be repeated forcefully because they can become persistent.
13 Hours: The Secret Soldiers of Benghazi, based on the true story of the assault on the US Embassy annex in Benghazi, it begins by news images of Gaddafi to devote then the fictitious reconstruction of characters and situations that leave soon an idea of likelihood. A Bay, and to us that we can not look away from the images in high definition digital, care much less make it credible that the idea of ​​linguistic and cultural babel of a country torn away and impossible to bring in a comparison with the ‘West. “Surreal … Different worlds” is the phrase with which one of the contractors defines the actions of the Libyan “good”, difficult to understand and to distinguish, at least as much as their “evil” counterparts. For the latter, once clearly identified, there is no habeas corpus able to save them. Their fate is inevitable, common to the Indians of Stagecoach, the zombies of Romero (recalled from Zombieland, slaughterhouse abandoned by the attackers crossed) or the aliens of Space Invaders: be killed without uttering a word, or have left a mark that can testify that they belong to the human race. But is this lack of understanding of the diversity of this “us or them” which reaffirms the distrust towards the other for itself, which feeds the savage film and patriotic, but pure adrenaline and Michael Bay. The one that can give you a long siege and vibrant as we have not seen each other in District 13 by John Carpenter. Cinema (American) is also this, we should not forget.