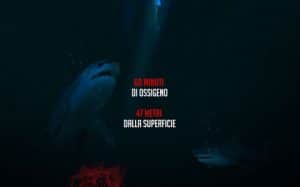 Two young sisters – Lisa and Kate – are on holiday in a marine location in Mexico. The situation would be ideal for the big time, but Lisa is upset about being left by her boyfriend. So Kate, the most casual of the two, tries to make her entertain by taking her out to night to have fun. Two young Mexicans propose to the girls to try the embankment of a dive in a cage in a place infested with sharks: totally safe, totally compelling. Lisa, worried, is hesitant, but since it was left by her boyfriend because it was considered boring, decided, pushed by his sister, to try to hit the life. When he sees the old rusty cage of the “captain” Taylor, Lisa is again filled with doubts, but Kate is resolute: the adventure must be lived. In the open sea the baits are thrown to attract sharks that immediately arrive. Then the girls descend into the sea inside the cage to be able to enjoy the sight of the sharks safe from their protection. But due to a technical problem the cage plunges to a depth of 47 meters and the girls find themselves in trouble with little air and too many sharks.
The sharks are a perfect emblem of terror since the times of Lo Squalo (and even before). Silent and hungry, they represent, in the movies, a threat against which it is difficult to defend themselves. For this reason, the films with the sharks have become a nurtured subgenus, which tends to be rather repetitive. However, there are variations, sometimes.
47 meters belongs to them, staging a situation that presents similarities with other atypical shark-movies like Open Water and Paradise Beach – Inside the nightmare, but with sufficient originality in the starting point.
The Englishman Johannes Roberts is a horror specialist, although he does not have a particularly brilliant pedigree: here he handles with skill an interesting situation, from claustrophobia in open space, in a directorial tour de force in which he finds appropriate times and ways to produce moments of tension and fright but without ever overshadowing the human aspect, which leads us to fear for the fate of the two protagonists grappling with something bigger than them. The tension is maintained rather high and convincing: sometimes the film runs through the little narrative substance (it is above all a situation film), but manages to effectively render the loneliness and despair of the girls in the face of a hostile nature for which they are just shark food.
Even without being particularly subtle in the description of psychologies, moreover, the film is also able to provide a convincing portrayal of the bond that unites the two sisters, different in character, but supportive and deeply affectionate. And the uncertainty in which they are insecure about the state of things on the surface (have they been abandoned or someone is looking for them?), Adds further elements of suspense. Of course the list of things that go wrong is a bit ‘too long and this detracts from a bit’ of credibility from each other, but overall the film is very realistic, compelling, tense and also endowed with a good final twist that it closes the story adequately. Good evidence of the cast with Mandy Moore and Claire Holt in good evidence and the nice participation of an old fox of Hollywood cinema like Matthew Modine – away from the glories of Full Metal Jacket, but still smart – in the role of a sea dog from the ‘equipment a bit’ too corroded by saltiness.