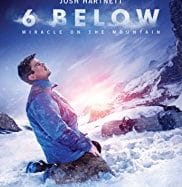 Eric LeMarque must continually test his limits and fight his own inability to respect authority. A former professional hockey player, Eric is now a self-destructive addict when he is preparing for an off-piste snowboarding in the Sierra Nevada in extreme conditions. A snowstorm is unleashed and the athlete remains a prisoner of the mountain, at the mercy of the elements.
Taken from the Crystal Clear autobiography, based on the true story of Eric LeMarque, the latest descent is a full-fledged sub-genre that has grown in popularity in recent years, that of the accurate chronicle of the struggle between man and nature.

Some elements recall the battle between Robert Redford and the ocean in All is Lost – Everything is lost, others the conflict between man and his own hybris, which characterized 127 Hours by Danny Boyle.

Of his Scott Waugh (Act of Valor) introduces a quid of likelihood, trying to get as close as possible to the experience of LeMarque without pressing unnecessarily on the accelerator. The wolves do not hurl bloodthirsty on man like in a horror film, for example, but they stop to weigh the pros and cons of a risky attack on both sides. The decision to maintain adherence to reality clashes with the frustrated demands of spectacularity, which Waugh conveys in flashbacks on the traumas of his past and in breathtaking panoramas on the splendor of the snow-capped mountains (of Utah, location used in the place of the Andalusian mountains).

Perhaps blocked by the rigid lines of autobiography, or by the fear of unbalancing in one sense or another the parable of LeMarque, the director withdraws in front of the Christian reading of the book, limiting itself to some mention in the form of prayer, and takes refuge in an elementary symbolism – the white powder of the drug that mixes with that of the snow, in a late gesture of redemption. Apart from the interest that can be aroused by mountain lovers, who will find some landscape applause, The last descent is mainly due to the repechage of two iconic faces of the nineties: Josh Hartnett, hardened by the passing of the years, and Mira Sorvino , constantly over the top, chosen for the role of mother despite being only ten years older than Hartnett.