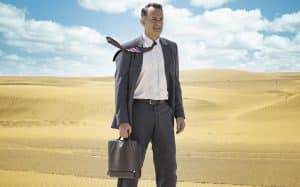 A Hologram for the King

A troubled businessman, Alan Clay, having failed in America, heads to a thriving city of Saudi Arabia, in a last desperate attempt to avoid recession, pay her daughter’s university fees, and do something memorable . Leaving behind the past, Alan faces a situation where he has nothing left to miss, he will face new challenges in a world completely different from that in which he grew up.
The film, played by Tom Hanks and directed by Tom Tykwer (Perfume – A Murderer’s History, The International, Cloud Atlas), is derived from Dave Eggers’s novel.