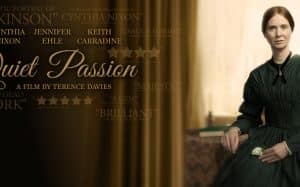 Born in 1803 to Ambers in Massachusetts. While studying at high schools, he decides to step away from Mount Holyoke College for not having to profess Christian. From then on he will live in the paternal home, reducing the number of visits of the outside world and devoting himself to writing and in particular to poetry. Some of his works are published while he is still alive even though the publisher resides in order to adhere to the canons he feels most appealing to readers.
Terence Davies has centered where others have sometimes failed. Imagine, then, the biography of a poetess of the Dickinson’s level of self-taught life, it would seem that he did not know enough to make a film and be able to draw a narration that not only saves from the usual philological reconstruction of so-called ‘costume’ works but offers To the public occasions of reflection on an epoch not forgetting (and here is the extraordinary exceptional) occasions of smile when not open laugh. Davies, thanks to an extraordinary Cynthia Nixon, outlines the progressive opening up to the art of a woman who is at the same time close to life. Because Emily, who is so radically transgressive at a young age, is progressively transformed into an eccentric woman (only white clothes and very few direct contacts with people outside the family circle) but becomes more and more rigid to the rules she applies to herself Would like to extend to others.
It is a space-bound world that the camera explores on more than one occasion by offering the décor the value it had in a bourgeois and puritanian house dominated by the figure of a comprehensive father but firm in deciding what was right and what was wrong. The words of countless letters and poems echo the life of a woman with the acute sensation that she is experiencing in a world where men are dominated and then pushed to seek an almost impossible reckless balance in her relationship with a beloved sister At the same time envied.