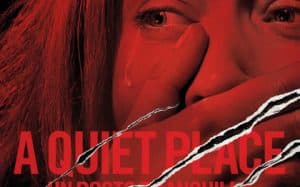 Abbott and their three children walk barefoot into an abandoned supermarket and along the way back home, away from the city. There are only a few in their area and they must be careful not to make any noise, or the terrible creatures that have invaded our planet will identify them in a moment and for them it will be the end. For 472 days, the Abbott survive, exploiting the language of the signs they know well, because the eldest daughter is deaf and dumb. But another child is coming and making no noise becomes increasingly difficult.
John Krasinski goes back to telling a family story, but choosing a completely different genre.

After being a son, dealing with the mother’s illness, in the play The Hollars, we find him husband and father, struggling with the mission to protect their family in extreme conditions, in this horror sui generis, which intelligently uses the ‘alphabet of the genre to tell a story that instead is discarded by the narrative combinations traditionally associated with it.
Krasinski director knows that silence, at the cinema, can speak much stronger than an accumulation of sounds, and he knows that the horror demands its sound crescendo and brings it back to a binary and essential stage, in which every variation with respect to silence makes a “monstrous” difference. The result is a very tense story and at the same time conducted on a primordial ground, in which everything that normally on the screen would translate into scenes, screams, conflicts, is forced to pass from the look, from the detail, from a revolution of practices and of certainties, which unites means and message.
The Abbott’s isolation is part of the elaboration of mourning and their existence, nailed between atavistic fear and necessary courage, is a metaphor of a daily condition, which has to do with the management of children’s autonomy and their growth, that the genre here adopted amplifies excessively, while, in inversely proportional terms, the obligation of silence limits its translation to speech as much as possible and thus its explanation.