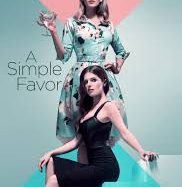 Stephanie, a mother vlogger, a widow and always busy, suddenly finds herself facing the disappearance of her best friend Emily, a super-glamorous mother who stands out for the aura of seduction that is dragged behind wherever she goes. The woman, after having entrusted her son to her friend, disappears from one small day to the other in the small town where she lives, without giving a warning to her husband Sean, who will join Stephanie to carry out the research. But what will come out will be betrayals, secrets and revelations until you get to hypothesize a murder and a plan of revenge by the woman. Meanwhile, Stephanie and Sean will find themselves very intimate.
Based on the novel ‘A Simple Favor’ by Darcey Bell, the story was adapted for the big screen by Jessica Sharzer and directed by Paul Feig, known primarily to the general public for products like Bride’s Friends and the feminine reboot of Ghostbusters.
This is a challenge for him with the thriller genre, but he always confessed to want to face: “I like to play with genres: I’ve always made comedies but thrillers have always been my favorite movies to watch! game: I had fun building it and putting it on stage I think Stephanie’s will always be one of my favorite characters as a director A little favor is a story about the nature of secrets and how they are revealed but also a story about women’s choices , often called compromises and deciding between career and children “.
Also for the cast this film is a little news. The protagonist has in fact the physicality of Anna Kendrik who in recent years has distinguished herself in the Hollywood scene especially for her talents as a singer and actress: iconic has become her role in the Pitch Perfect trilogy as well as participation in musicals such as Into the Woods. While for the other side of the female duo, Blake Lively, the mistery tones are more familiar.