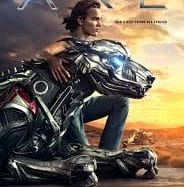 Miles is a great rally biker, but he’s not very comfortable with human relations. Due to a dangerous joke, one day he finds himself alone in a remote valley. There he runs into A.X.L., a robotic dog designed to be a dangerous military weapon, equipped with a sophisticated A.I. which makes his behavior very similar to that of animals. Between Miles and A.X.L. a sincere friendship will be born immediately, but put in danger by the scientists who want their creature back. With the help of the beautiful Sara, the two friends will have to do everything to escape their enemies and prevent the aggressiveness of the robot dog from taking over.
This first work by Oliver Daly seems to take full advantage of the classic wild man-animal films and the successful family operations of the 1980s.
The robotic dog, in fact, is not so different from an E.T. by Steven Spielberg, and some scenes seem to pay homage to the progenitor of the genre revisited in a modern key.However, having the right references is not bad if you know how to calibrate them and update them. And this is exactly what happens in this film when the technology of the new millennium is added to the already consolidated narrative expedients: the dog / robot enters in connection with humans through the smartphone, can see their movements from the Go-Pro attacked on helmets, knows how to intercept electronic movements. On the big screen this translates into a dynamism of gaze and of format changes that is very much exploited in the new action productions that provides a new lymph to the genre and adapts it to the language of interactivity.
But the most appreciable aspect of the film remains the attachment to primary feelings: at the center of everything there remains a beautiful story of friendship, never set aside by the desire to bring out science fiction at all costs. It seems an operation of other times, paradoxically vintage in intentions, with good educational prerequisites and the right fascination for diversity. Precisely for this reason the final incursion of the military operation is a bit like an excessive burden to the adolescent halo of a film that in the first part had never shown the claim to epic action. It was perhaps inevitable in order to make sense of the narrative, but still leaves the hint of a disharmonious note within the overall atmosphere.