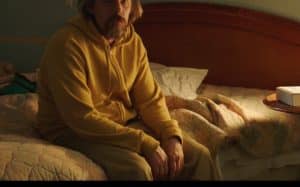 In the film, Hawke plays a recently released ex-convict who finds an abandoned child in a dumpster and faces an ethical dilemma.
The story of the film is certainly quite simple, but also very effective. Part of what makes the film so interesting is its message on the rule of three strikes. The messages the film has about forgiveness and the two chances are very important in today’s society .
The protagonist is so well described. He is extremely convincing from the start because of the unfortunate situation he is in, but his actions in the first act of the film make him even more sympathetic. It is in the second act when he begins to live his own main arc, and it is much more convincing than you would expect.
The film has a bit of humor that helps make it enjoyable. From the premise, it looks like this will be a dark and depressing film about a desperate man discovering a baby. It is an elderly person who tries to acclimatize himself in modern society. Sure, there is a sadness in the reason why the protagonist is in the situation, but the film does not take much care of this.
He gives a phenomenal performance in the main role, bringing tones of depth and excitement to the character. One of the things that really makes this performance is that it’s so subtle.
At the technical level, the film is surprisingly powerful. The appearance of Marshall-Green does not suffer from the same problems that affect the work of most actors-directors.