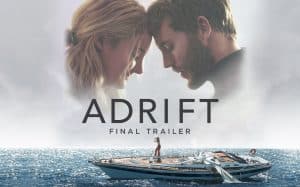 Tami and Richard are two free spirits. She is American, she is 24 years old and she keeps herself with occasional jobs, letting herself be carried away by the destination wind to the destination. He is English, 33 years old and has traveled the world on a sailboat, strictly solo, with the aim of crossing the infinite horizon. When they meet they immediately understand that they are twin souls, and Richard invites Tami to share a newly obtained assignment: bring back the luxurious sailboat of a couple of wealthy friends in San Diego – coincidentally the birthplace of Tami, from which the girl she is voluntarily removed with the intention of not coming back. But the sea is unpredictable, and a furious tropical storm hurls the sailboat on which Tami and Richard were celebrating their love amid the deep waters, thousands of miles from the mainland. Will the two young people survive?
The Icelandic director Baltasar Kormákur is not new to the stories of survival and telling the unequal comparison between man and nature: his previous film, Everest, had the disastrous expedition of a group of climbers on the highest mountain in the world.
Both Everest and Resta with me are based on true stories, and in both cases the director suggests that, at the origin of the drama, there is a component of hybris, a desire to challenge elements for fun and a desire for adventure destined to encounter a sort of divine punishment. In addition, the protagonists of Resta con me, which in the original language was titled “Adrift”, or “adrift”, are victims of a family background that has made them unable to take root and establish lasting human relationships.
Fortunately there is love, which rejoins these two souls “adrift” and makes their link the first anchor of salvation. It is on this key that Kormákur, author of the subject and of the screenplay, leverage not so much to create a romantic story able to catch the young audience, but to build the path of affirmation and emancipation of Tami, for which Richard becomes a sort of inner strength invincible. She is the one who wants to cross the infinite horizon, and he only pushes her in that direction, helping her to overcome her fears and her hesitations.