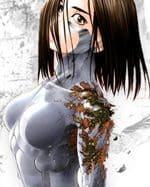 The film will not be a summary of the nine volumes that compose the series, but will consider some of the elements of the first four numbers, including the sport known as Motorball. It is a sport involving cyborgs equipped with special weapons from the contact and protective armours, the objective of which is to take a metallic sphere of 40 kilograms at the finish or be the last player alive. The runners are equipped with special pads that allow it to whiz by at very high speeds.
In the 26th century, a girl cyborg is saved from waste by a scientist, dr. Ido. Alita becomes a lethal weapon, a dangerous being but can’t remember who it is or where it comes from. But for Ide, the truth is all too clear, Alita is the one who can break the cycle of death and destruction left by Tiphares, but to accomplish his purpose he will have to fight and kill.