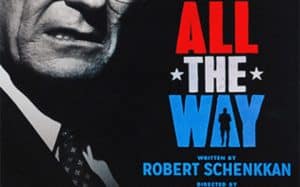 Cinematographic adaptation of the first of two theatrical performances dedicated to the presidency of Lindon B. Johnson covers the first year of office since November 1963 (after the killing of John F. Kennedy being vice president) until the November 1964 election focusing the attention in particular on its commitment to the approval of a civil rights law for African Americans.
The figure of Lindon B. Johnson has been present in at least three films in recent years. In J. Edgar of Clint Eastwood he showed the not easy relationship with Edgar Hoover, the FBI tutelary deity. In Selma- The road to freedom in the center was his relationship with Martin Luther King and the racial issue while Jackie underlined the poor feeling of Jacqueline and Bob against a vice president who had wanted to swear, in a way considered a bit ‘suspect, directly on the plane that reported the body of Kennedy from Dallas.
In this interesting film, produced by Steven Spielberg with HBO, Johnson is firmly at the center of the scene with his roughness and also vulgarity throughout Texas but also with the determination to complete the Civil Right Bill designed by Kennedy. It is no coincidence that there is Spielberg among the producers because, on more than one occasion, we find ourselves thinking that history repeats itself.
As in the Spielberghian Lincoln compromises, games that are not always politically clear seem to be unavoidable if we want to obtain the final result. The man of the South, convinced that he can persuade even the most riotous southern states of the Confederation to see in him the symbol of tradition that must confront a justice that has been too long denied, is forced to change his mind. So much so that in the electoral campaign for the actual election of President he will be against a decidedly racist candidate like Barry Goldwater.
The film looks to the past (giving space also to its confrontation with Martin Luther King and instead leaving the war in Vietnam in the background) but with an eye to the present. It seems, in fact, to ask oneself what the passing of the decades has served if America approaches the elections, still having the problem of racism on the table as a burning issue.
The three activists killed in Montgomery in Alabama in 1964 and taken off their car by a representative of the police force are reminded of too many recent killings of African Americans by police. This is also a task for filmmakers: making us reread the past not only as if it were taken from a dusty archive but as a lesson for the present.