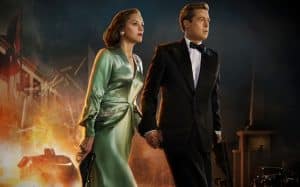 1942. The commander of French-Canadian Aviation Max Vatan get to Casablanca to know Marianne Beausejour and pretend her consort. Together the two must be invited to the reception of the German ambassador and assassinate him. The operation is a success and one of Max and Marianne comes the most unpredictable and careless breeding.
Open on a story of spies during the Second World War, in which the high rate of glamor is guessed right away, it is a clear choice of field. The temperature of the beginning of this story at Casablanca is equally so, with a lead of love for film and references to (or comparisons with) bulky models, that only an author of the reach of Robert Zemeckis is able to support.
Today that cinema arises, increasingly, as an object of analysis in which the narrative component plays an almost secondary role, where what counts is how you say rather than what they say, Zemeckis is the map of ideal litmus. To say the two titles far between but just as exciting in that sense, already Flight, A Christmas Carol and The Polar Express are of questionable entertainment tools but conceptual challenges out of the ordinary. If looking at the surface of Allied is in fact possible to grasp quotes or (apparent) or greenness (apparent) descents in bad taste – the sex scene in the sand storm or the ellipse to which follows childbirth in a hospital bombed by the Germans – altering the reading level is inevitable to appreciate the skill and the density of the sense of making Zemeckis film.
Incipit that sees the commander Vatan parachute in the desert, getting closer to the ground without ever landing, are at stake, now, is the symbolism that the sense of unreality that characterize the reconstruction of Allied. Along with Tarantino – and his grotesque rewriting of history – that of Zemeckis is a story on film and on storytelling around the events of World War II, where Spielberg’s Saving Private Ryan wanted to play those events in a more realistic way possible.
The flavor is that of the classic film, with Pitt and Cotillard divas as unattainable and impeccably dressed up with Casablanca again Transition theater, love and secrets (although there is much more that Hitchcock Curtiz in Allied). But a picture is transfigured, doubly false – as evidenced by the mirror which reflects the image of Marianne – which reveals its contemporary nature through some essential details. The turpiloquio, commissioning explicit scene of sexual tension, a homosexual couple portrayed as would have been unthinkable to do at the time of RKO. In line with its latest production, Zemeckis intentionally sidetracks the audience, with that mocking mastery which is proper to one who accepts challenges only when they involve an extreme risk (A Christmas Carol, The Walk). Cinema of the (dis) illusion among the most daring and interesting available. For those who are willing to accept the challenge and do not settle.