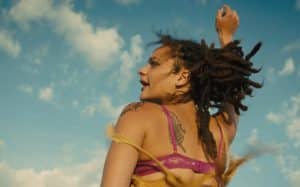 Star, a teenager with no star in heaven, and a father abusing in the earth, is Jack, a guy bigger and (in)secure of her, the urge to go, leaving behind a mother absent and two brothers innocent. Recruited to sell subscriptions door-to-door, salt on the van Krystal, the ‘owner’ in the customs of the business and lover of the fickle, Jack. Along the roads of the Midwest, between a cigarette and a cane and a song by Rihanna sung it loud, Star and Jack fall in love. She has a dream, he capital to buy it but the journey is still long and probably does not lead anywhere.
Loaded on to a van full of smoke and music, the american youth Andrea Arnold no longer dreams. To dream for them is left only Bruce Springsteen, who sings on the radio “Dream Baby Dream” and the american dream ever more elusive and inconsistent. The british author, ‘the photographer’ the generation after Larry Clark, after AIDS, the punk and the anger. Confused, fluctuating, sexually, and psychologically indeterminate, the characters of American Honey will have lost the intention of flight. Moving them is not the ambition but the precipitate of a desire that only serves to make ends meet and to get to tomorrow, where everything starts again the same as yesterday. The movement is not towards but around and the loop is the’ algorithm’ of a movie that idles and repeats in an obsessive, endless times. Day and night, like a mantra, the team teen repeats the same gestures, sciupando the time, and the absence of always the way of escape. For the Star it is love that like the wind takes the back.
Absolute object of his desire is Jack, played by Shia LaBeouf who finally finds the role capable of contemplating and understanding its tensions with schizophrenia. In front of him and between his arms, the dazzling newcomer Sasha Lane, star of a road movie oversized and feeling of a film launched along an America without grace. Reaffirming the fiber social life of his movie, Arnold runs through the streets of the subculture, and american, reducing with the 4:3 format, the mythology of its landscapes, of its oil fields, its local, its large spaces, allowing you to focus on the characters, their faces, their bodies, the way they vibrate, love it, enjoy it. Excluded from any social framework, the boys and girls of Arnold are cousins coming of the spring breakers by Harmony Korine, without leave of the school. Shots of Rihanna chasing the freedom, rather, an illusion of freedom by selling magazines that they are relics, anomalies anachronistic.
American Honey ‘sounds’ literally the B-side of America Obama suspended between story and comedy (pop) music. The first movie of the british author, outside of the borders of his country, the American Honey is a road trip that grinds with miles a utopia that is never formulated, but postponed in a proceeding (and loosely) without end. It is capable of moving in the reality of opening brackets as magic (the encounter of Star with the bear) or dark (paid sex in front of the oil well), the director is blowing on the film a lyricism that lifts his heroin from the newspaper and sticking like a thorn between the America of myth and the contemporary. In that gap paradoxical, the film interrogates the protagonist on his dream. A dream of love that Arnold grow tough in a place without hope, hopeless place sung by Rihanna. Once, twice, a hundred times.