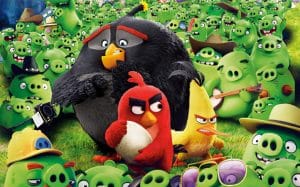 The island of the birds are all happy, distribute hugs and love being in a group and party, convinced that there is another world beyond the borders of their land. All all? Not exactly. The exceptions to the rule by the name of Terence, a seemingly mute giant, Bomb, black plumage and explosive, Chuck, yellow and very fast, and especially Red, red with anger bird.
Nicknamed “Eyebrows,” Red is the marginalized among the marginalized, so that his house is even physically distant from the others. But Red is also a lone voice, not a shy or a succubus, and invasion of the green pigs provides an opportunity to other birds to understand that his voice should be heard more often, because it could go hence their survival.
Could you never cross, inside a smartphone, a kiosk, a gadget, the furious expression red bird, star of one of the best known video games and downloaded era recently. Less obvious draw was a film that lived its own life and did not make me want to look for a button under the chair of cinema to close the application and move on. Although it will not stay the course in the history of the best animated films, and despite recourse to some narratives frankly abused and to a perpetual soundtrack, Angry Birds – The Movie actually succeeds in.
After all, designers and producers could count on an idea of ​​original basic and universal at the same time: the idea of ​​anger, feeling that the children know very well and that adults are bent often let out of the film dedicated to them, or to connote the only negative, affibiandolo the villain of the moment. Angry Birds says clearly that sometimes angry it means to do the right thing and that anger can become the engine of a positive determination.
The link with the game is assured by the dynamic of the battle between birds and pigs and reaches not surprisingly its apex in the scene of the launch of pennutti beyond the porcine fortification, which in fact narrativizza the same as the video game concept. The major distinction could take place, however, in terms of the public: if even the octogenarian mother of the executive producer has made peck to play on the iPad (cursing a pig and legend has it that this has given to the son the idea of ​​deriving an film), the film version, in spite of a few meager quote bold, is essentially calibrated for a target child.