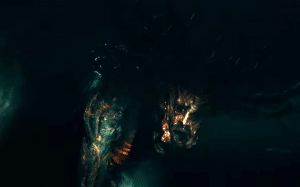 A horrible monster with a vaguely human form spits flames capable of devouring everything: you have to start from this drawing made by one of the young characters in the film to enter the mood of Antlers: a horror that clearly starts from a peaceful and reassuring environment to introduce new and unexpected fears. The film, written by Scott Cooper, has one of its strengths in the cast, aligning together Keri Russell, who we will see in Star Wars: The Rise of Skywalker, and the very good Jesse Plemons recently appeared in El Camino (the film that concludes the Breaking Bad series).
Antlers is inspired by the short story “The Quiet Boy” published in Guernica magazine and signed by Nick Antosca, who also contributed to the script with the same director. Antosca is also the creator of the horror series Channel Zero and co-starred with Michelle Dean in the creation of The Act, the crime series starring Patricia Arquette.
Antlers, whose meaning indicates horns or stage of horns, takes place in a small town in Oregon where Julia Meadows, played by Russell (best known for the series Felicity and The Americans) is the teacher, while Plemons has the role of his brother and local sheriff.
In one of the classes followed by Julia, one of her students (who has the face of Jeremy T. Thomas) hides a terrible and disturbing secret that emerges only from his drawings and a short composition in the form of a fairy tale. But Julia wants to help him and take care of him. But the child’s own relatives could endanger the entire community. Also interesting in the cast is the presence of Graham Greene, who many will remember for his role as a Kicking Bird in the award-winning Ball with the Wolves for which he received an Oscar nomination. Rory Cochrane, a well-known face in the role of Tim Speedle in the CSI – Miami series, also participates in the film.