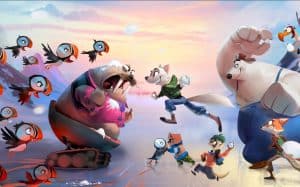 Swifty, an Arctic fox, dreams of becoming one of the famous Top Dogs, a sledding team that delivers packages for the Artic Blast Delivery Service. In the Arctic, everything comes from somewhere else and delivery service is at the heart of the community. What makes the Top Dogs the heroes of the Arctic.
In an attempt to demonstrate its value, Swifty secretly puts the command of a sled that has to deliver a mysterious packet into a secret and frozen fortress, where he faces with Dr. Walrus (John Cleese), a plump wiggly genius evil walking on robotic legs, and commands a faithful army of puppeteers trained in a bizarre way. Swifty stumbles on the evil plane of Dr. Walrus, who wants to create a tunnel to the center of the Earth to melt the polar caps, flooding the lava planet and becoming the king of the world.
Now Swifty has to resort to the help of his friends: PB (Alec Baldwin), an introverted polar bear, Lemmy (James Franco), a distracted albatross and rock and roll, Sal (Omar Sy) and Weez (Heidi Klum) theories of the conspiracy, and Jade, a hard red fox like steel, so Swifty has a secret cotta. This messy team will have to join and overcome their differences if they want to prevent Dr. Walrus and his puppet army from destroying the world. Welcome to the Great Northern Cold!