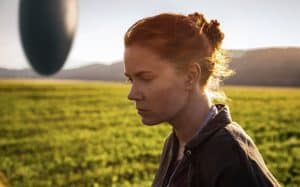 Louise Banks, a world-renowned linguist, is inconsolable mother of a daughter who died prematurely. But what I believe the end is rather a beginning. The beginning of an extraordinary story. In the world float twelve alien ships waiting for contact. Excellence in, Louise is recruited by the US Army along with the theoretical physicist Ian Donnelly. The mission is to penetrate the monumental monolith and ‘interrogate’ extraterrestrials on their intentions. But the task proves to be very complex quickly and Louise will have to find a common alphabet to build a dialogue with each other. The world outside the meantime goes crazy and the world powers declare war all’indecifrabile alien.
Asked if the Earth is the only place to host life, the cinema has often responded coarsely. It’s hard to get away from the founders models in the field of space exploration, harder circumvent the clichés. Venture into space, leave the beaten path and write a story radically new enterprise is (almost) impossible but pursued and generating imitators galore. But the first time Denis Villeneuve in the absence of gravity is one of those you never forget.
Without revolutionizing the imagination of science fiction, the Canadian author evokes a concept and gives it a form. From parts of Spielberg (Close Encounters of the Third Kind) and Zemeckis (Contact) rather than of Roland Emmerich blockbuster, Arrival does not address the question of the end of the world, no bloody military confrontations or battles, men and aliens this time trying to communicate and understand.
If the theme is given (and seen), Villeneuve adds an extra dimension inquiring about our way of communicating. Waiting to complete the sequel to Blade Runner, debuted in the genre and creates an intimate fiction drama that split the human côté, already at the heart of Gravity and Interstellar.