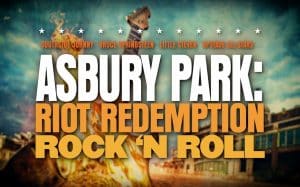 Once a renowned seaside resort, in the summer of 1970 Asbury Park was overwhelmed by the racial revolts that paralyzed the city for the next 45 years, dragging it to the edge of the abyss and reducing it to a state of total urban decay. In an Asbury literally split in two, the revolt destroyed the legendary jazz and blues scene of the westside. But from the ashes of the burning city, the iconic Jersey sound emerged. The documentary film in fact reports to the legendary UPSTAGE, the psychedelic club famous for its ‘after hours’, where its native children began to play: Steven Van Zandt, Southside Johnny Lyon, David Sancious and Bruce Springsteen, who in the coastal town from New Jersey began his extraordinary musical career. Closed for over 45 years, the Upstage represents a perfect synthesis of that Club, a crossroads for young talents and today one of the extraordinary places narrated by the documentary, full of interviews and unpublished performances. So Asbury Park finally lives its awaited rebirth and it is the music that has torn it from death. The long-awaited film event will include never-before-seen films, such as those of the legendary sold-out concert at the Paramount Theater, which saw Little Steven, Southside Johnny, Springsteen and the Upstage All-Stars compete on guitar riffs with “the future of Asbury music “: a group of 11-year-old rockers who are living proof that” the best days “for the city may simply be ahead of us.