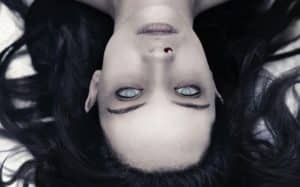 The Autopsy of Jane Doe

Grantham, Virginia. In the basement of a home theater of a mysterious duplicate murder is also found the corpse of a young woman. Nobody knows who he is and therefore is called Jane Doe, generic name. The lawyer Tommy Tilden, assisted by his son Austin, is commissioned to carry out the autopsy of Jane Doe to identify the causes of death, which are unknown. The body is in perfect condition, without any obvious signs of wounds or bruising. So what did he kill the girl? This is the mystery that father and son have to reveal through the autopsy. Wrists and ankles are fractured, gray eyes, tongue discolored. A fly also comes out of Jane’s nose. The more the analysis proceeds, the more mystery is clothed in a climate of horror that can only lead to real horror. Meanwhile, out, an epoch-making storm is coming.
Horror claustrophobic, all shot in an autopsy room and adjacent offices with, in essence, two only characters to hold the story (plus the inscrutable corpse of Jane Doe), the film is a successful construction of the suspense , Which also plays a lot on the details (eg the bell-tied to the corpses as in the old days, to see if they are really dead) and the way they metonymically affect the events.
The first part is masterful in presenting a more disturbing situation, disseminating the story of strange and mysterious facts, thus giving the sense of an enigma from unfathomable depths. The second part is conducted in almost equally magnanimous manner, but it slaps a little in predictability, deflating in a fight for life against the explosion of unknown and incomprehensible forces, as well as malicious.
The film also draws the psychology of the two protagonists, in particular that of his father, a widow for two years, who carries in innocent guilt for the death of his wife. This makes the characters more humane and makes us follow their fates more closely, as it should always be, but rarely happens in horror movies.
When it is finally revealed, the mystery is not entirely up to the expectations created, but it does not disappoint and maintains a trivial pathos charge. A horror, which should please such lovers, but – apart from the realistic autoptiptic details that could hurt the most sensitive – it should not displease even newcomers for its quality and the evocative power of the story it tells.