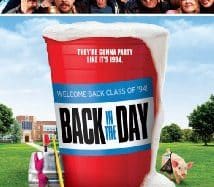 Back in the Day

Set in Brooklyn, the film tells the story of a young boxer who is taken under the wing of a mafia boss after his mother dies and his father moves away from the city.