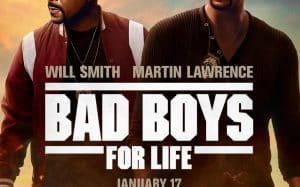 After a long gestation of several years and especially after more than 17 years from the lucky Bad Boys II who arrived in the cinema in 2003, Will Smith and Martin Lawrence or detective Mike Lowrey and Marcus Burnett return for the third and last race, with the film Bad Boys for Life. The film saga set in Miami and with the background of the fight against drug trafficking was born in 1995 and saw the direction of Michael Bay in the first two chapters, connoting itself for the extreme dynamism of the action scenes. It is not surprising that the long period of time to arrive at this third film, after all 8 years passed between the first and the second film, it was in fact 1995 when Bad Boys burst into the cinema, proving to be a success and collecting over 140 million dollars worldwide .

In the third film the two main characters, detectives Lowrey and Burnett, the bad boys of the film have reached the threshold of retirement, a refrain that recalls the dialogues between Danny Glover and Mel Gibson in Lethal Weapon, but decide to undertake a last mission together reiterating “Ride togeter. Die together”.

A few extra pounds for Martin Lawrence and the past years are all tools to animate the small gags between the two who have not lost their feeling at all. Once again together despite the differences in character, because friendship and trust unite them, so Lowrey and Burnett, now promoted and close to the end of their career, have to face a new trafficker who has sworn to kill them to avenge his brother who died for because of the two detectives.

In the cast we find Theresa Randle as Marcus’ wife and above all Joe Pantoliano in the grumpy and irascible captain Conrad Howard. Compared to previous films, however, the director is different. There is no longer Michael Bay who has given his approval to the new sequel replaced behind the camera by the Belgian couple Adil El Arbi and Bilall Fallah.