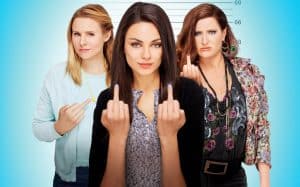 Amy is a working mother of two children under his care in every way, while her husband, a big kid, is more or less to watch. Amy’s mother arrives late, that forgets the parents’ meetings, that does not respect the rules for biological homemade sweets to bring to the market and that, in general, beyond the control of the despot Gwendolyn, blonde, rich, arrogant represented the school. But at one point Amy just says to her husband, with stress, with obedience to Gwendolyn and her blackmail. And from that moment it is open war.
There once was a time when children were creatures in the margins, entrusted to nurses, threatened by high infant mortality, silenced every time it were not for their turn to speak, unable to have their own opinions to the age or can even attend the social gatherings of adults. That era is so far from the costume today that he has lost his memory. Today we recognize the children the status of persons for all purposes; parents prefer to deal with it first most of the time and secretly envy them because they belong to an age of life for the more comfortable and carefree. Today also exaggerate: they are no longer small to having to seduce to get our attention but we are after them, putting them at the center of the table and attention, going crazy to please them and not to be outdone by the other parents. All this, in a time that no longer knows the help of the community and the large family, but only the difficulty of having to do too much, just too much, in too short a day.
Bad moms starts from this paradoxical truth (in one of the few absolute truths effects of our years), spice with a hint of Jewish sarcasm, tightens with massive doses of clichés about American WASP milieu and brings the protagonist easily, Mila Kunis, on the verge of a nervous Breakdown. He could get out of a dangerous, irresistibly irreverent movie, but no.
Instead, bad moms of the title are not bad just for nothing: their sin is to indulge in alcohol and bad language for a period of short duration, only to recover all and more, including Bachelor. After all, parenting itself is almost a pretext to sow some obstacle in the way of romantic comedy and happy end. Reversing initial expectations, Bad moms turns out to be a sentimentalone product, really obvious traits, sometimes able to make inroads, but only and strictly in the soul of contemporary fragile and exhausted mothers.