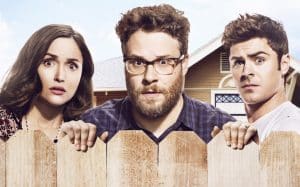 For the second time in Bad neighbors party boy Teddy, he reiterated his refusal to become an adult, he collides against the newlyweds Mac and Kelly who chose to start a family and forget the wild college days. But this is just the beginning: soon the three find a common enemy against whom to ally, or a trio of freshmen decided to set up the first sorority deratted by sexist stereotypes (but not from the compulsion to organize orgies). Too bad that the sorority arises right next to the love nest of Mac and Kelly, pregnant for the second time, and disrupt their plans to sell their house to the highest bidder.
Writer-director Nicholas Stoller, who has had the most recent Muppet movie and freqeunta the round of Judd Apatow (but did not the iconoclastic talent), builds on everything we know about the film college, long become a kind film to itself, to build a story that mixes gags childish (even in the best sense of the term) and social awareness (the gay couple, the neofemminismo) trying to give a shot at the rim and a barrel. In some scenes it works, especially thanks to the skill of the performers among which a Zac Efron involuntary victim of their abs and a (non) culture that rewards the good looks than the depth. Seth Rogen is more predictable in the shoes of the nerd who decided to grow because those abs will never have them. The surprise of the film are the two protagonists: Rose Byrne, respectable wife from semipsicotiche drifts, and Chloe Grace Moretz, leader of the sorority by confused ideas and unstoppable determination.
Stoller gives (her) up in the physical gags, see what takes place in the garage of the newlyweds, and the worst in the pull moralistic, and the whole craziness is counterbalanced by empathy towards all the characters and tenderness palpable in their interactions . If most American ethos, which also characterizes the film far more “engaged” as Everyone wants something, is based on the sense of fraternity as an antidote to individualism rampant, here we venture in the contrast between the new social sensitivity and the “old school “machista and bon vivant where girls of the sorority seek to attribute a feminine spin, escaping the imperative of flattening of stereotypes determined by males. But there is no revolution, it simply plays on what we have been taught the sagas of Porky’s and American Pie, with less laughter and less thematic or stylistic innovations.