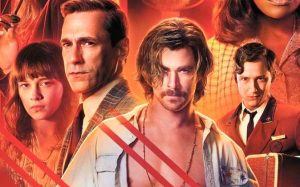 Bad Times at the El Royale

Sixties. A man rents a room at the El Royale hotel, hiding a voluminous bag under the floorboards. A few moments later he is killed by another man, whose identity remains mysterious. Ten years later some customers decide to stay in the same hotel, located on the exact border between California and Nevada, to the point that a red strip physically divides the spaces in half: on one side the rooms in Nevada – the state of vice, illegality and gambling – on the other those in California – the state of free love, protest and Hollywood. One after the other the characters will reveal their true nature: because in 7 strangers to El Royale you do not have to follow the flow of money as much as the motivations that brought everyone present (including the concierge) to that isolated place on the border between Good and bad. It is worth bearing in mind in which historical epoch we find ourselves: the war in Vietnam, the proclamations of Nixon, the spies of J. Egard Hoover, the battles for civil rights.
Drew Goddard, the writer of Cloverfield, World War Z and The Martian, as well as the author and director of That House in the Forest, creates a puzzle to recompose card after card, but also leaves some empty boxes, inviting the public to make their own assumptions.
The main pieces, however, fit together, perhaps a little too perfectly, and the plot lets itself be followed, also thanks to twists and carefully disseminated shock sequences. We are in the post-Tarantinian territory, with some homage to David Lynch, and the character gallery can leverage the consummate acting skills of some performers – especially John Hamm and Jeff Bridges – as well as the aesthetic appeal (and little else) of Dakota Johnson and Chris Hemsworth.
The pivot around which the whole story revolves, however, is the Motown music, especially that interpreted by the powerful voice of its splendid interpreter, the star of the London and Manhattan musical Cynthia Erivo, recently passed to the big screen. It is she who gives a backbone to a film very concerned about the form and less attentive to substance: it is human quality of Erivo to make us glimpse a lived and a thickness in his character of singer from 12 euros per hour, when his manager ( Xavier Dolan, candid only for the color of the skin) it pockets too many more.