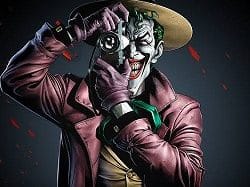 Batgirl and Batman are able to interrogate a delinquent. The case is difficult and Batgirl / Barbara begins to feel emotionally involved, as one of the gang’s bosses morbidly invaded her. Meanwhile, detective Bullock informs Batman of a murder he is accused of Joker, who in the meantime is targeting Commissioner Gordon: his goal is to let him go crazy and to do so at first he shoots at Barbara and forces him to Stand on the wheelchair, then drive him into a tunnel of horrors in a playground and forbid him to see his daughter’s pictures right after the assault. Batman takes time to save him from the madness and confronts Joker firsthand.
The film is taken from the original comic book published in 1988, written by Alan Moore and illustrated by Brian Bolland. In the movie, dubbing back to the actors who had given the voice to Batman and Joker in the animated series of the ’90s.