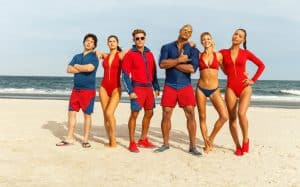 The film adaptation of the television series of the nineties played by David Hasselhoff and Pamela Anderson.
Dwayne Johnson and Zac Efron are the protagonists interpret and respectively Mitch Buchannon (played by David Hasselhoff in the series that will appear briefly in the film) and Matt Brody (in the series was the role of David Charvet). The role of Pamela Anderson instead is entrusted to Kelly Rohrbach, model became popular for having had a relationship with Leonardo DiCaprio and for the moment only seen in some TV series.
Director instead was called Seth Gordon (Horrible Bosses and live happily).
The synopsis: the lifeguard Mitch Buchannon is forced to work with youth Matt Brody to stop the ambitions of an oil tycoon.