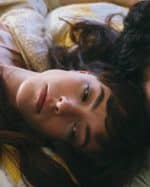 Henry and Diane are in their thirties in Los Angeles. They have been together for six years, they are not married and they do not have any children. It should not be a problem, only, possibly, a free choice, yet the social pressures irritably press on the couple, who lives the delicate transition from the sentimental and sexual vivacity of the early times to a more habitual and tiring condition. A marriage contracted by reaction, almost to laugh, triggers an immediate and unexpected series of discussions and quarrels between the two young people, who separate for a day and a night, feeling obliged to go to the bottom of their perplexities.
Rafael Palacio Illingworth, in his second work, evidently puts a bit of himself in the character of the filmmaker Henry, who must follow a promising debut, managed in a radically naturalistic way, and runs away with his fantasy towards a science fiction project (like a say far). Between us is, instead, between the lines, perhaps that very first film we are talking about and that we can not see: an independent dramatic comedy, which focuses entirely on the (cinematographic) truth of the performers and the staged situation. “It’s so raw and honest about relationships and couples.” You seem to see yourself on the screen .. Those are the small moments we all passed … “: it is with these words that the moderator of the vague debate that follows the screening presents the Henry’s film, but it is clear that Illingworth plays in the same terms also of his film, the one that contains it.
A cameo by Peter Bogdanovich, in the role of his father, introduces the element that breaks the balance of the couple, revealing the unexpected precariousness: a new apartment, elegant, bourgeois, empty. To buy it, for Diane and Henry, would mean getting out of a condition of supposed freedom, even or especially one of the other, and engage with a lifetime contract, be it the mortgage or the marriage. “It’s just one thing!” hysterically screams Diane, unable to deal with the emotional consequences arising suddenly, and seems to hear Cassavetes speak – undeniable tutelary deity of the genre – when he speaks of his cinema as an expression of a culture that has at hand the material satisfaction of their needs but at the same time he can no longer listen, or even diagnose, human problems. Those same problems that the director of Between us materializes in the form of a cloud that dominates in the living room of Henry and Diane, well placed, invisible, “among” them. An emotional tangle that, if at the beginning of the film, seems to threaten a storm, in the end takes on a completely different, almost indispensable, tenderly human sense.
While Ben Feldman, in the role of the male half of the couple, has easier play, it is to Olivia Thirlby, in the character of Diane, that the film requires the greatest act of commitment. The melodramatic strings do not always sound in the best possible way, and the film does not always manage to avoid some stagnation in the rhythm, but they are small uncertainties in the overall picture of a fluent and tuneful execution.