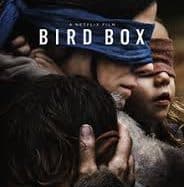 Malorie, pregnant in the ninth month, is one of the few survivors of a series of mass suicides that has decimated the world’s population. Barricaded in a house with other people, the woman tries to work out a strategy to survive in a world where you just keep your eyes open to die. A mother must bring her two children to safety. He must do it knowing he can not rely on sight, he must do it blindfolded. Even her children are blindfolded (“If you take off the blindfold, you die.” If you look, you die. Together, these three fragile and blind individuals must navigate along a river, face rapids, penetrate a forest, fight with rowing, clubs, punches, knives and makeshift objects against natural and supernatural enemies. Something else? Wanting, yes. Even if the heart of the film is all here.

Distributed by Netflix, shot by the Danish artist Susanne Bier and taken from the best-seller of the talented Josh Malerman, Bird Box is a thriller aimed at getting the net result for which it is clicked: scare, without the amplification of the hall and the suggestion of the great screen, the viewer.

Careful repertoire of the most modern themes of the genre cinema, assembled with surgical precision – the malicious ones will say: algorithmic – in order to blow the streaming viewer on the sofa, softly resting in the comfort of his home, Bird Box is an effective product that centers the goal without revolutionizing anything at all. Is there an apocalypse (a disease, an alien invasion, a mutation, a divine cataclysm?) Book and film do not explain it: reticence works), there are survivors destined to scare, love and kill themselves (not necessarily in this ‘order), there is a vague hope of salvation and there is all the list of post-apocalyptic accessories – corpses, smashed cars, supermarket to be sacked, insects crazy and animals in freedom.

There is also a certain moral, a distant resonance with reality: in a world like ours, obsessed with seeing and showing, sick with selfies and stories, Bier paints a scenario in which sight is forbidden, and the the very act of looking, though through the filter of technology, is a fatal move.