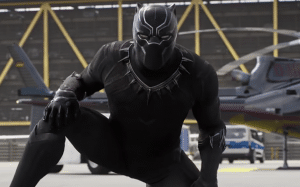 After the death of his father T’Chaka (in Captain America: Civil War), T’Challa, played by Chadwick Boseman, inherits the throne of the wicked African nation of Wakanda, but as history teaches successions are politically turbulent moments. Much more than Wakanda is by no means the third-world state that appears and behind an elaborate façade lies the most advanced country in the world, whose technology is developed by the vibrant mineral, the same as Captain America’s shield Wakanda has great resources because of an asteroid of this material that millennium ago on its soil.
T’Challa is an African king and there were not many movies on this subject in any kind. So compared to other Marvel movies … it’s completely different. The protagonist is a royal one, like Thor, but he is also a terrestrial, and this changes a lot, because he gives him a different context and brings him closer to reality, even though the film is full of fantastic elements and incredible technologies.
Ryan Cogler
The dilemma at the center of the film is the political direction to be given to Wakanda, because T’Chaka before he died was talking to the United Nations and wanted to open the nation more to the outside world. T’Challa does not know if he really wants to do so and while facing the effects of this policy within his nation, with rivals such as M’Baku, played by Winston Duke, young leader of the Jabari tribe who believes the country also cause excessive reliance on the vibration.
There is a more personal issue, but devastating effects: the hatred that Erik Killmonger (Michael B. Jordan, inevitable in Cogler’s films) feeds for the royal family and therefore for T’Challa, so fierce and rooted to take it to escape the most dangerous enemy of Wakanda state, Ulysses Klaue (Andy Serkis). This one, who had lost an arm in Avengers: Age of Ultron, intends to get the resources to feed his obsession with the vibrancy. Now fitted with a mechanical arm that hides a deadly weapon, Killmonger will be the main antagonist of the film.
He is the only person who has been in Wakanda and has seen the wealth he intends to reveal to the world. He believes it is a deeply hypocritical country, because he pretends to be a third world nation. Klaue is a man who drops governments, is a gunman and knows how to manipulate people. Andy Serkis.