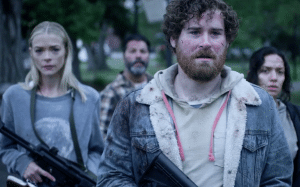 A mother away from her daughter who embarks on a harrowing journey to find her again without stopping in front of anything. Alongside a group of American refugees, he must face a new hostile world and take extreme decisions in the bloodiest summer ever seen in a zombie apocalypse.
Six weeks after a deadly virus began to spread, the United States is already in a panic, the institutions are crumbling and the survivors are taken to special army camps, but it has no room for everyone and so the families. Rose thus ends up separated from her daughter and embarks on an odyssey to find her at the stadium, a place that many try to reach because it is considered safe. She will be joined by a criminal who claims to be a military man, and other characters cross their path like a Korean girl who hardly speaks English and a deaf Syrian immigrant.
Staged as a very tense mosaic of points of view and made of pure action, tension and extremely dramatic scenes, Black Summer is the adrenaline-fueled and relentless version of The Walking Dead and restores energy to a genre that is by now television-like, like the apocalypse zombie.
The merit is above all of John Hyams, creator of the series together with Karl Schaefer and screenwriter and director of more than half of the episodes of the first season, including of course the first and the last. It deals with episodes of variable duration, all built on a situation or a clear idea and tense up to the spasm, with dialogues reduced to the bone because in the end we revisit a vein where there has been too much talk. The one of Hyams and the other director Abram Cox is above all a visual tour de force, with long sequence plans, a great mobility of staging and a lucidity of direction that accompanies the characters in an ever-increasing chaos.
If the first episode takes some scenes from different points of view and introduces many characters, to make them meet only at the end, in the following ones we tend to concentrate on a few of them. In the fourth, for example, we follow a solitary young man chased all the time by some ferocious infected while hiding without luck in one place after another. In the fifth instead everything revolves around the characters besieged in a diner surrounded by a few but brutal undead attackers. Not everyone works in the same way, for example the third episode set in a school, where the students have set up a cruel game by Lord of the flies to the nth degree, it is pulled by the hair and the tension fades.
The episode on the “blow” of the group of survivors in a structure protected by the military also requires a strong suspension of disbelief, given how articulated the plan is, how many things are at the mercy of the case and how much information and preparation time the group should having had to implement it. On the other hand, unlikely or not, it is a magnetic episode in its interlocking trajectories of the various characters within the structure, which is another place to say the least decadent in which the strongest enjoy it and the weak are reduced to sexual slavery.
In this episode, but not only, ours show an absolute disregard for authority and for how the military is handling the crisis. If they are not in words, also because in the series there is no room for long speeches, they are certainly anarchists in fact, to the point that to cancel certain injustices they do not hesitate to unleash a bloodbath and a horde of undead. Theirs is an instinctual rebellion, the sign of the worst so much the better, and it is not solitary, as evidenced by the fantastic last episode on the attack on the stadium, where many other groups converge and unleash a furious against armed between men, soldiers and undead, where not a few end up victim of bullets roaming in the chaos of the struggle. A really visually impressive episode, which closes perfectly the open circle in the pilot, rightly cruel in killing some protagonists but also wise in leaving open wires for a possible second season.
Black Summer was initially announced as a spin-off and a prequel to Z Nation, a series closed last season with the fifth season (it was aired in USA on SyFy), but with the passage of time in the interviews this connection was via via sminuita, to the point of being completely denied by the lead actress Jaime King. Moreover, even if the production of Asylum is the same and the authors are the same, the tone is completely different and the same is true for the characters. Whether formally it is a prequel or not, it is certainly a series with its own autonomous strength and breath, from the great stylistic concentration that gives us back the best John Hyams (son of Peter), that of the ruthless and violent cult Universal Soldier: Day of Reckoning. A welcome return to form.