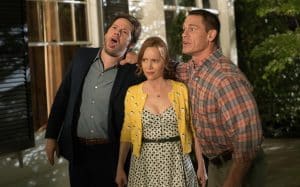 For Julie, Kayla and Sam, friends inseparable from the first day of elementary school, the night of the prom. Too bad that three of their parents can not accept it and, discovered via WhatsApp the project of the three girls to always salute the virginity that same evening, they launch in a crazy run of the last minute to prevent them from living their own life and take responsibility for themselves.
Proposed as the female answer to the comedies on the boys hungry sex gender American Pie, Hands off our daughters is anything but a modern feminist tale of emancipation, because the three girls play a role marginal compared to the “heroes” of the comedy, that is to say the two fathers and the mother, engaged in gags of the Zeta series based on liters of alcohol threaded via pipe in the backside.
It is not enough to have the idea of ​​exchanging parents and children, painting more idiots the first and more autonomous the second (to then finish all agree, all on the same course of action, to tarallucci and wine), if there is not a ‘invention that supports it, a brilliant dialogue that corroborates it, a bit of malice that spits it, because in this way the raid of adults in the Millennials area is only pathetic.
Of course, the best comedy comes from the drama, and here is the tragedy of a generation of parents who does not have a life regardless of the existence of their children, who behaves parasitically and vampiresically, exchanging being present with the be envious, but it is a pity to see an actress like Leslie Mann employed in a role that traces the male originals in all respects, without making any distinction.
The same goes for Kay Cannon: it is extremely difficult to trace the screenwriter of Pitch Perfect in the director of this film, in which, despite all the limits of the case, a world, a tone, a series of characters and a sense of self-deprecating humanity . Down the hands of our daughters is instead populated with cardboard shapes, two-dimensional characters that reserve the surprise of being in reality as it was obvious to imagine that they were (the big man with an easy tear, the young man at all costs who turns out to be the wisest of the company) and the war between parents and daughters does not shoot a blow: it makes peace before even confronting, in the name of a humor of very low league, made of collective vomiting and evacuations in other ways.