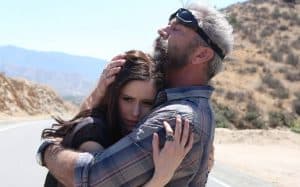 After that the boyfriend into for stealing a fortune in cartel drug-trafficking, the eighteen-year-old Lydia is forced to flee, finding only one ally: his father John, a biker drunkard, drug addict and outlaw. Determined to protect her daughter from all evil, John, for once in his life, he will do the right thing.
The filming were held in New Mexico.