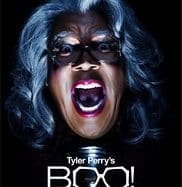 A new film based on Madea, the popular character created by Tyler Perry, here in the double role of actor and director. In this film, following the Tyler Perry’s chapter in Madea Christmas (2013), Madea will face the paranormal: there will be assassins, ghosts, demons, witches and everything will happen over Halloween night.
The cast is made up of Tyler Perry as the protagonist, accompanied by Bella Thorne (The A.S. S. in the sleeve) and by Cassi Davis, already the interpreter of Madea’s Big Happy Family.