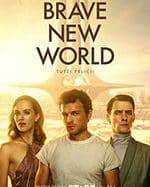 The series tells of a utopian society that has achieved peace and stability through the prohibition of monogamy, privacy, money, family and history itself. The series was shot in the studio in South Wales and in a few locations around London. New London citizens Bernard Marx (Harry Lloyd) and Lenina Crowne (Jessica Brown-Findlay) have always lived in a rigid social order. Curious to explore life beyond their society’s restrictions, the two New Worlders embark on a vacation to the Wilds, where they are embroiled in a violent and heartbreaking rebellion. Bernard and Lenina are saved by John the Savage (Alden Ehrenreich), who flees with them to New London. John’s arrival in the New World threatens to disrupt its utopian harmony, and leaves Bernard and Lenina to face the consequences.