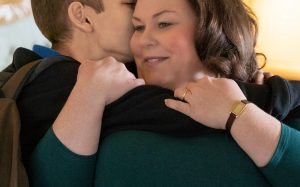 If there is little doubt in such stories about the alleged healing by faith, it is even less for the painful reality that most similar stories do not have a “miraculous”ending. To agree, this film has a character question for which some people live, saved by a miracle, while others, like-minded loved and prayed for, die.
With her husband, Brian , Joyce raised John, a young man adopted during a trip to Guatemala. At 14, John is much more interested in music and friends than his mother, who expects her son to behave and talk as if he were not a teenager. At first, she accepted things she didn’t like , such as John Noble, the new pastor of her church, as well as her hair and musical choices for church service .
John and a few friends walk on the ice on a local lake. The ice breaks and John sinks for about 15 minutes. Tommy Shine, thinking he hears a voice telling him exactly where to look, pulls the boy out of the water.
Doctors pronounce John dead, but when Joyce says a prayer next to his son’s body, the boy’s heart begins to beat. A drowning specialist is not optimistic about John’s chances. Joyce tells the doctor to do his best and “let God do the rest.”