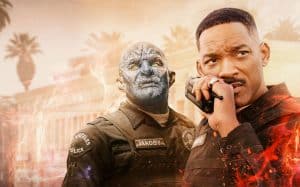 In an alternative Earth humans coexist with fantastic creatures, such as ogres and elves, who are the only ones who can use magic. This makes them a privileged class, a sort of equivalent of 1% as director David Ayer defines them, while orcs are the most humble in the social ladder, they do strenuous jobs and nobody cares for them until they give themselves to delinquency . The police in fact pursued them and in more than one case tormented them with innocents. Precisely this racial tension has given way to the “diversity” program that creates the starting point of the film: a black agent, Daryl, finds himself as a partner Nick, the first Los Angeles policeman.
It was great to be the first LAPD black cop who finds someone to be racist. You are never on the other side of racism when you are black.
Will Smith
During a routine night watch, the two discover a powerful artifact, a magic wand that was thought to have been destroyed and of which Tikka, a young elf, is in possession. The wand is so powerful that it kills any human trying to use it. It was created by the ancient elven witch Leilah, who naturally wants to get back to her to implement revolutionary projects.