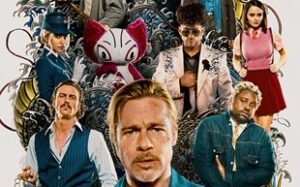 Ladybug is an agent of a mysterious organization, which entrusts him with tasks beyond the boundaries of legality. He doesn’t consider himself a killer: it’s just bad luck that people end up dying during his exploits. This time he would have an easy easy task: steal a briefcase on the Shinkansen, the very high-speed “bullet train” that connects Tokyo and Kyoto. Too bad that the briefcase is in the custody of a couple of talkative but also lethal hitmen: Lemon & Tangerine, that is lemon and tangerine. The two also have with them the son of the White Death, a Russian-born criminal boss who has taken control of a faction of the yakuza. But that’s not all: The Prince travels on the train, a girl who is only apparently defenseless and with a Machiavellian plan, who blackmails the Japanese Kimura to work with her. In addition, two other assassins are in the game: Hornet, a killer with poisons, and Wolf, a Mexican hitman looking for revenge.

A traffic jam of characters populates a story with unity of action, place and time, but where everyone talks to each other until exhaustion.
Based on the novel “The Seven Killers of the Shinkansen. Bullet Train” by Kotaro Isaka, the film by David Leitch rewrites the characters making them not only Japanese but international, in order to make them embody more or less famous stars. At the screenplay is Zak Olkewicz, who has only one TV Movie in his CV and who proves to be completely inadequate to synthesize the source material in a cinematic way – in fact, the duration is just over two hours. Leitch is known for co-directing the first chapter of John Wick, which he followed up with other action like Atomica Bionda, Deadpool 2 and Fast & Furious: Hobbs & Shaw, titles more and more over the top with a growing dose of comedy, but also spectacular and rather violent. Bullet Train, however, takes it one step further and makes the action almost secondary, focusing on squabbles and actors who turn out to be a surprise.
The recipe based on ridiculous killers facing each other for a MacGuffin is not new: we are on the side of Tarantino’s films that multiplied between the second half of the 90s and the early years of the new millennium. Often made for the home video or television market, they focused on gratuitous violence choreographed to the fullest and on dialogues that mimicked, almost always badly, the virtuosity of Pulp Fiction. Bullet Train is something of a luxury upgrade, with a cast of celebrity or emerging faces from Brad Pitt to Brian Tyree Henry, and some massive CGI special effects scenes.
Too bad that Leitch’s strength, that is the hand-to-hand combat, is sacrificed to the tireless gab of the protagonists and to the flashbacks, who try to demonstrate how ingenious the plot is. Even the villain, who enters the scene last, makes one of those monologues where he explains his plan and only needs to curl his mustache congratulating himself on his cunning. Of course Bullet Train tries to digest the gab with the help of irony, but the constant winks are not enough to forget how trite and stale everything is.