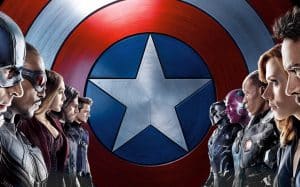 The consequences of the great clash occurred in Avengers: Age of Ultron lead to a showdown between the Avengers and the nation states. America in the first place asks the heroes to register, ie to stop being independent and act under the command of the sovereign states. The team thus splits in half, with one part of heroes (headed by Iron Man) supports the idea in order to continue its mission and another (headed by Captain America) believe that all this goes against their own idea of ​​mission. Divided and with different objectives, the Avengers face the threat of a terrorist who does terrible own attacks against them, affecting among others the king of Wakanda, the African state at the forefront of the conflict to superhuman as producer of a single metal and useful to the cause. In all this the soldier winter, Bucky Barnes, is back and appears to be just him responsible for the attacks, again devoid of memory, again prey to the will of others and again in need of the aid of Captain America.
The series of films are dedicated to Captain America for Marvel the manner of taking the real world chest (or almost). To Steve Rogers is the same universe of the other superheroes, but the stories concerning him always to do, in one way or another, with practical issues and with the manner in which the state takes care of its citizens. Since his debut with Marvel Studios (Captain America – The First Avenger), which had to do with the manner in which the state takes advantage of his soldiers to fight the wars they do not understand, the second (Captain America – The soldier d ‘ winter) thought in the middle 70’s, phobic and paranoid, centered on secret agencies and the limits of their power, the latter up to the red wire is always the ethics of governments and their propensity to take advantage of those who are supposed to protect.
Despite the large presence of other Avengers face appearing Civil war as a movie of the Avengers series, the same in which the plot revolves around terrorism and constant fear of invisible and unstoppable attacks leads back all the themes dear to Captain America. Is more strongly stressed the theme that holds almost all the films based on American comics, the real way in which Hollywood continues the great reasoning on our years: how what we do to protect ourselves is actually the leading cause of the threats that we afflict.

In a film that relies entirely on a contrast between positive forces, more alive in marketing then in history, in a way no different from what was done by competition with Batman V Superman, it is therefore the presence of a tiny threat, very human and not at all super, to mark the difference from the rest of the features movies from Marvel comics. A smart one, small anonymous (played as always very well from Daniel Bruhl) escapes to the gears of justice and spread terror with unpredictable attacks and an invisible strategy. It is among us but we do not see, has bad intentions, but do not know when, where and how to strike.
However, it is a subtle difference that does not balance the feeling of already seen. The Marvel universe, to the movies, it works as a great TV series: despite the changing different directors (which has led to different results) style, the look and the staging are always consistent and, especially in the Civil War, this It leads to a strong impression of repetitiveness, not so much in history as in the manner in which events are presented. Chases, against physical, verbal confrontations, carried out the plot, presentations of villain and even the final showdown, arrive and are always conducted in the same manner, variations on the same canvas. Indeed even the chases and the action moments are all alike.
It so happens that even a well-made film, and questionable as the Russo brothers might be the same forgettable, lost in the sea of ​​similar works and unable to stand if not for the fleeting appearance of a new character. Is Spider-man the only presence capable of reviving the film, for the first time in the hands of the house who invented it (it was Sony and not the Disney now owns Marvel, to manage its earlier film rights) . It is not so much the quality of writing or character qualities in themselves to make a difference, since the completely new look with which the film is watching. If in fact the other heroes are filmed at the same height, Spider-man is looked at as a kid. In the other films dedicated to him, even though he was still a teenager, the prospect was that of his peers, looked like a guy looked at by other kids, but here’s a guy as they see the adults, full of ingenuity, trivial problems and too impetuous . Rather than out of tune this new work a lot, marks a substantial difference from the other, a specific filmic idea and brings a completely different air to the film. Sign that, as there was no need to remember it, even in the world of cinecomic apply the same rules that reign the rest of the film, which is that as events and characters are watched makes all the difference possible.