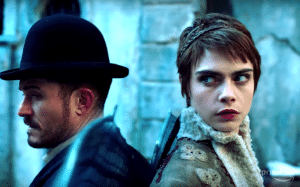 Can a fantasy series become a metaphor and tell a lot about what we live every day, addressing issues such as racism, xenophobia, immigration and integration? The answer is called Carnival Row, the new Amazon Original series available in the original language in more than 200 countries starting from August 30th (and dubbed later in the year).
Absolute star of the unpublished stellar pair formed by Orlando Bloom, in his debut in the serial television world, and by Cara Delevingne, respectively in the role of a detective named Rycroft Philostrate and a fairy named Vignette Stonemoss.
They will be the ones to move into a Victorian fantasy world inhabited by fatigue by mythological creatures, hunted in turn by humans – intrusive, violent, attackers – from their kingdoms of origin.
For those who do not belong to the human race it seems completely impossible to live, love, even move freely. A climate of absolute darkness, broken however by the hope brought by even positive characters. We will witness adventures, misadventures, plot twists and daring events that closely concern the leading couple: if one hides a secret that threatens the world of the Philostrate investigator, the latter is more committed than ever to following the trail of blood of a series of disturbing murders.
“I play a fairy this time, but I can associate with you that mine is a more than credible character – says Delevingne – The one in which he lives is a world that needs love to survive. And this is essentially my character: to survive, to love , and is moved by an immense, deep, contagious passion “.
Instead, Bloom focuses on the charm of the mythical creatures of the series: “In a universe of fantasy you will see fantastic beings fly and in the magnificent flow of the scenes you will discover that in reality they struggle every day to live and live together. Precisely this basis of realism, set in a narrative enchanted, interested me from the beginning “.