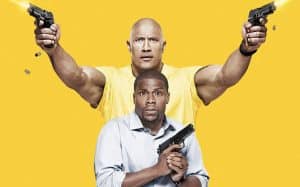 Once upon a time, and precisely at the time of high school, the couple formed by the best promise of school, Calvin “The Golden Arrow” Joyner, and his girlfriend, Maggie, who would soon become his wife. And then there was Robbie Weirdicht, the super fat guy, the last day he had engraved in memory of a generation, after being dragged naked from a group of bullies in front of a gym full of students. Twenty years later, however, Calvin is not on that pedestal: the arrow remained in the space. Robbie, however, who now calls himself Bob Stone, is a big guy all muscle and saves the world on behalf of the C.I.A.
Rawson Marshall Thurber, better known as the director of Dodgeball – Balls on the bounce, has an idea of ​​comedy rather classic but no less effective. An idea in which stands a pair male and where the nature of the relationship is the focus of the game, inflated and extremist (Calvin was the myth of Bob in high school and, in a mixture of gratitude and falling in love, Bob wore his jacket every night for years, in place of pajamas); in which the lines must be numerous (thus some work better than others), action essentially tireless and, to scattered laughter along the way, should be followed by a different laugh, bitter and sentimental: that of someone who laughs last laughs best because .
A spy and a half is the mirror of its protagonist: a mountain with a tender heart in the middle. The architecture of the comedy, hybridized for the umpteenth time with the spy genre, runs practically on autopilot, filled with everything that involves the classic recipe, but so let down in history the opportunity to talk about something else. The theme of bullying, in fact, seems in this case anything but pretentious, as well as the choice to face backwards, from the perspective of those who now is great, very great indeed, appears and confirms a good idea. Some things never stop hurting – there says- but it is also to put them in perspective: the time and character can completely rewrite certain dynamics, and it certainly can do that film.
The friendship between the most popular high school boy and the most battered is the concept doubled the reversal of roles between the main actors, starring Dwayne “The Rock” Johnson in the role demented dell’omone who loves unicorns and Kevin Hart, comedian, to be his shoulder “square” in the role of an accountant who needs to find the courage. It will not be the original subject, but it is enough argument.