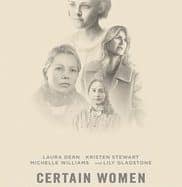 After Western Meek’s Cutoff (presented at the Venice Film Festival in 2010) and dramatic Wendy and Lucy (for whom actress Michelle Williams won the Toronto Film Festival prize and received a nomination for the Independent Spirit Awards) Kelly Reichardt returns to work for the third time with actress Michelle Williams.
The film, also starred by Laura Dern and Kristen Stewart, tells the lives of three women (an advocate, a wife and a ranch owner) intersecting in the background of the Montana landscape.