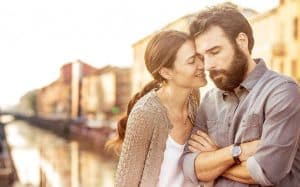 Claudio and Anna are a couple of tardotrentenni condemned to precarious: she mathematics alternate with the mirage of the assumption in the role, he reduced computer engineer to reclaim computer infested with viruses. To finance an innovative project Claudio creates an account crowdfunding, but users contribute to the fundraiser so totally inadequate. One evening, after a series of small humiliations, Claudio and Anna get drunk and record on video a promise: if they can achieve the goal of crowdfunding filmeranno a marital sex night and make visible to those who have made their contribution. Claudio, still prey to the fumes, post your videos and the deals begin flocking. A will be worth nothing the attempts of the pair to cancel the account, and the two will be confronted with how the world responds to their initiative, not just virtual ones of the people of the network, but also, very real, the friends, colleagues, relatives and neighbors home.
Edoardo Leo adds another station in its directorial path of contemporary Italy story started 18 years later and continued through Good morning dad and We and Giulia. And it does so with communication tools that have become his authorial figure: language accessibility, craftsmanship, awareness of ethical concerns that led the way, as individuals and as a country, we deal with the inglorious drifts of modernity.
What do you want with it Leo builds a parable about simple and reaches anyone who is struggling with both the distortions engendered by high technologies, with the moral choices that the “progress” we submit. Because the question “What is your price?” It concerns us always, but even more now that the goal is no longer the well-being but mere survival. At the center of the story is first and foremost the right to work, because what Claudio and Anna seek is not the easy money but its exact opposite: an adequate response to their hard work and preparation. Following close behind, in the strict cause-effect relationship, the right to start a family, which is not a fertility problem but an economic opportunity (will be the upset of the film’s characters, belonging to another generation, to remind Claudio and Anna that “every child brings his bread”). The core of the story is, however, a word that appears only to two-thirds of the film: dignity. Because this is about: how many ways our dignity as human beings is put into play by a society that crushes individuals and as a social universe that showcases (and sedan) our vanity with unprecedented ruthlessness and relentless pervasiveness?
The screenplay, written by Leo with Marco Bonini, Alessandro Aronadio and Renato Sannio (the last two also co-authors of the subject), carries a chisel work to create a polyphony of voices: those of Claudio parents and Anna (masterful and Bebo Storti Massimo Wertmuller), the ambiguous and contrast of uncle Franco (Rocco Papaleo, comic counterpoint to the tragedy inherent in the story), the anonymous and vexatious of hungry surfers to selfies and fresh meat for the media pillory.
The direction is clean and functional to the story, without great flights of fancy, but at least in a couple of scenes (the nightmare, the disco), with the desire to visually tell the fireworks frenzy engendered by the network. Leo confirms its craft industry in building the scenes making sure the solidity more than the artistic ambitions, and the audience can not help but follow step by step the story of ordinary madness, inevitably wondering: What would I do instead of Claudius and Anna? The previous film, from Indecent Proposal in Sex Tape Perfect strangers, do not prevent Leo to create a narrative that adds modern elements (understood in the pejorative sense) and apparent lightness ( “What do you want it?”) To the oldest dilemma of the world: how much is our intimacy? But it’s the acting that registers the most interesting note: passive, almost catatonic for most of the film next to a much more responsive and “empatizzabile” Anna Foglietta, Leo explodes in a couple of scenes giving voice (and pissed off) to the frustrations of countless male contemporaries silenced, humiliated by the inability to provide for his family, ridiculed by a surface universe and voracious that feeds identity, or gender, to validate their existence. Existence (as is already clear from the opening credits) embedded in a mobile phone or on a computer screen, the slave of the import mode (as that “living apart together” with which the Franco uncle must face to save a ten-year marriage ), set to the precariousness and the microsaving, unprepared for the unexpected. An existence in which, for all, the time comes ” ‘sti cocks” that is to say “I’m not going to take this anymore.” You want it to be is a painful and at times heartbreaking comedy where you laugh bitter, that disturbs and sometimes disturbing because fishing in our real and daily frustration. For this Claudio and Anna live and represent the contrary, like a photographic negative: because today, as yesterday is more important to say “what we are not, what we do not.”