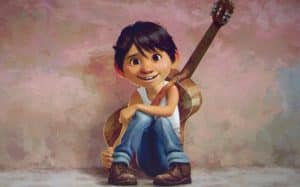 The animated film, we know, has time other than using the shell actors and real environments, so it is not uncommon for a “new” sink project in truth the roots in the not very recent. In the case of Coco, the Disney-Pixar film inspired by the Mexican holiday of Day of the Dead, and will be released not by chance in November, you have to look back seven years to identify the genesis.
Closed the third installment of Toy Story, in fact, in 2010, the director Lee Unkrich (Finding Nemo, Monsters Inc.) Gets to work on the story of twelve year old Miguel, son of shoemakers, who are forbidden to make music because of the misdeeds of an ancestor musician. But when, precisely on the Day of the Dead, Miguel finds himself playing the guitar of the late Ernesto de la Cruz, he is magically transported to the afterlife and forced to solve the ancient and never dormant family problems. Here he will also find himself a great affection, grandmother, Mama Coco.
If reading these few lines of synopsis of your mind you have been visited by the memory of the setting of “Grim Fandango”, cult video game a few decades ago, or The Book of Life (The Book of Life), the film directed by J.R. Gutierrez and produced, among others, by Guillelmo del Toro, you’re not alone. Even then, Manolo Sanchez, kid with music in their blood but promised to a career as a matador, undertook a journey to the Land of Forgotten to revive his sweetheart in a dynamic overtly Shakespearean. The film begins Unkrich though from a very different terrain, stranger to rise to the Latin culture, and struggling for the very first time -to regard the filmography Pixar- with an entirely South American cast. The giant Disney, initially, did not move with the touch on this ground, infuriating many, especially on social, with a request to buy the words “Dia de los Muertos” and make it a trademark.
Also because of this awkward beginning of the work, which has been shifted forward the supposed date of creation and distribution of films, Unkrich and his collaborators have returned several times to Mexico to investigate the portrait of the character, with the result that the initial fascination with the bright colors and the carnival atmosphere that characterizes the party in question and that “clashes” so perfectly with its content of skeletons and personifications of Death, has been enriched, according to its authors, the deeper suggestions and knowledge always more in-depth. With this background, and quality that Pixar has accustomed us, Coco, directed by Lee Unkrich and co-directed by Adrian Molina, author of the screenplay, has all it takes to start to replicate the previous eighteen wonders’ animation of a unique company, founded by Lucas Film, went to Steve Jobs (who baptized with the name that has it become known and still maintains) and then to Disney, no loss of brilliance and autonomy. Very first study to develop an entire feature film in computer graphics, Pixar has for thirty years at the very first place in the industry and nothing seems to threaten its supremacy. With Coco US creative meeting for the first time a complex subject, so far unexplored, after crossing the sea surface, the doors that divide the world of monsters from that of humans, or the barrier that separates the world of a young girl from that his emotions (Inside Out), it’s time to cross another threshold, the one that separates the world of the living and the dead.