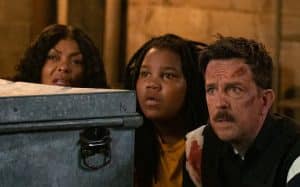 The cop James Coffee has two problems in his life: he is incompetent and in love with Vanessa Manning. Too bad he is the beloved mother of the terrible Kareem, a rebellious and disgusted twelve year old ready to turn to drug traffickers to eliminate the unknown aspiring stepfather. A daring misadventure between the family member and the criminal who will see them fighting, running away, insulting each other, getting to know each other and fighting side by side.
Twelve-year-old Kareem, a lover of foul language, with the dream of becoming a rapper and Myke Tyson as a model of life, is a typically Netflix character.
It seems to have come out of Stranger Things (it could be yet another friend of the group, at Gaten Matarazzo, but more vulgarotto), as from The end of the fucking world. It is through him that director Michael Dowse gives life to what is an unusual family adventure: an escape for two from corrupt criminals and policemen that becomes an opportunity to get to know each other – and stop insulting each other -.
The juxtaposition of opposite characters in itself evokes hilarity, then stuffed with tavern jokes, heavy suburban slang or ape to rapper style, at times it becomes hilarious. Intentionally comic, admittedly exaggerated, with slapstick and other dementia-level scenes, it is a film that clearly has no other claims than to entertain and amuse the viewer.
A politically incorrect metropolitan b-movie to deride and make people laugh a little about everything, from teenage problems to corruption, from drug trafficking to racism, from social unease to family matters.